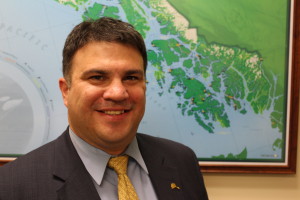 Senator Stedman announced today the hiring of David Scott as a legislative aide.  David is originally from Metlakatla, Alaska and belongs to the Raven Clan.  His maternal grandparents are the late Irving and Barbara Leask from Metlakatla and his paternal grandmother is the late Cora Brown from Prince Rupert, British Columbia.  Like many Southeasterners, he grew up commercial fishing and playing basketball.

David attended high school in Metlakalta and graduated from Olympia High School in Olympia, Washington.  He then went on to serve in the United States Navy for 4 years and was deployed twice to the Persian Gulf.  He used the GI Bill to pay for expenses while attending Fort Lewis College in Durango, Colorado where he majored in Political Science.

David has over nine years of experience working in the Alaska State Legislature.  His notable accomplishments include time in the House Majority Leader’s Office and with a member of the Senate Finance Committee.  Former legislators he has worked for are Representative Kyle Johansen, Senator Donny Olson, and Representative Jim Colver.

David and his wife Danita continue to make their home in Ketchikan with their two daughters, Aurora and McKinley, where they enjoy, camping, fishing, hunting, and youth sports.  Please help me welcome David to the team.